You are here: Home › When does the 2021 hurricane season start? 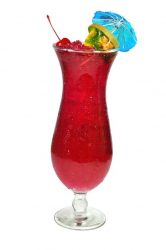 Would you like to know how good your car and home insurance companies are before the storms start and you can’t change to another company? If so, it’s easy. Just click the buttons below.

With COVID waning (thank you to drug companies for rapidly producing an effective vaccine), we need a news story replacement. This could be the replacement. Hurricane season starts on June 1. Fortunately, the 2021 forecast looks like we won’t have another 2017 or 2020. However, the odds are that 2021 will be above normal.

Sit back and have one of the thirst quenching hurricanes and we will give you both a historical perspective and a forecast.

How bad will this years hurricane season be?

The National Hurricane Center is part of the National Oceanic and Atmospheric Administration (NOAA). The NOAA is a government body. Their mission is to collect and analyze data and share the resulting information about tropical storms and hurricanes. As hurricane experts, there’s no better organization to let us know everything we need to know, and maybe a little more, about the hurricane season.

Today, June 1, marks the beginning of a new hurricane season. Unlike other seasons, the hurricane season is five months long. This is a full 67% longer than other seasons. Another difference is that other seasons tend to be fairly consistent. For example, in most places summer is warm for the entire three-month period. Similarly, many places are cold all winter long. With hurricanes, the season builds slowly, then dissipates slowly. See the chart below for more information showing when storms throughout the hurricane season. 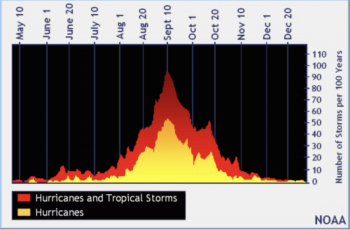 Chart showing the official Hurricane Season for the Atlantic Ocean, Caribbean Sea and Gulf of Mexico is from June 1 to November 30.

The chart from the NOAA above shows that the official response to when is hurricane season is June 1 to November 1. The season starts slowly, followed by a period of rapidly increasing activity beginning in early August. Mid-August to late October is when much of the hurricane activity occurs. However, deadly hurricanes can occur at anytime during the season.

How many Atlantic hurricanes do we usually have per year?

With that as a historic perspective, let’s look at the 2021 forecast.

What will the 2021 hurricane season bring?

Forecasts for tropical storms and hurricanes indicate 2020 will be an above average year for both number a strength of hurricanes. The chart below from the NOAA gives a probability of what the hurricane season will hold. 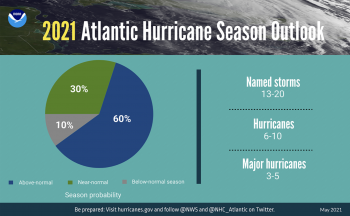 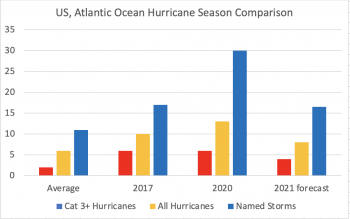 The chart above provides a visual comparison of the average number of hurricanes per year, vs. 2017  and 2020 (both severe hurricane years), vs. the mid-point of the forecast for 2021. The data points above are based on NOAA data. The chart shows 2021 is expected to have a level of hurricane activity between the average and 2017.

The Certainty About Hurricanes

It’s difficult to forecast how many hurricanes there will be, or how strong they will be. However, hurricanes aren’t entirely unpredictable. The certainty about them is that they will be named, and we know their names in advance. The NOAA chooses and publishes the names. For the 2020 season the names are shown in the table below. 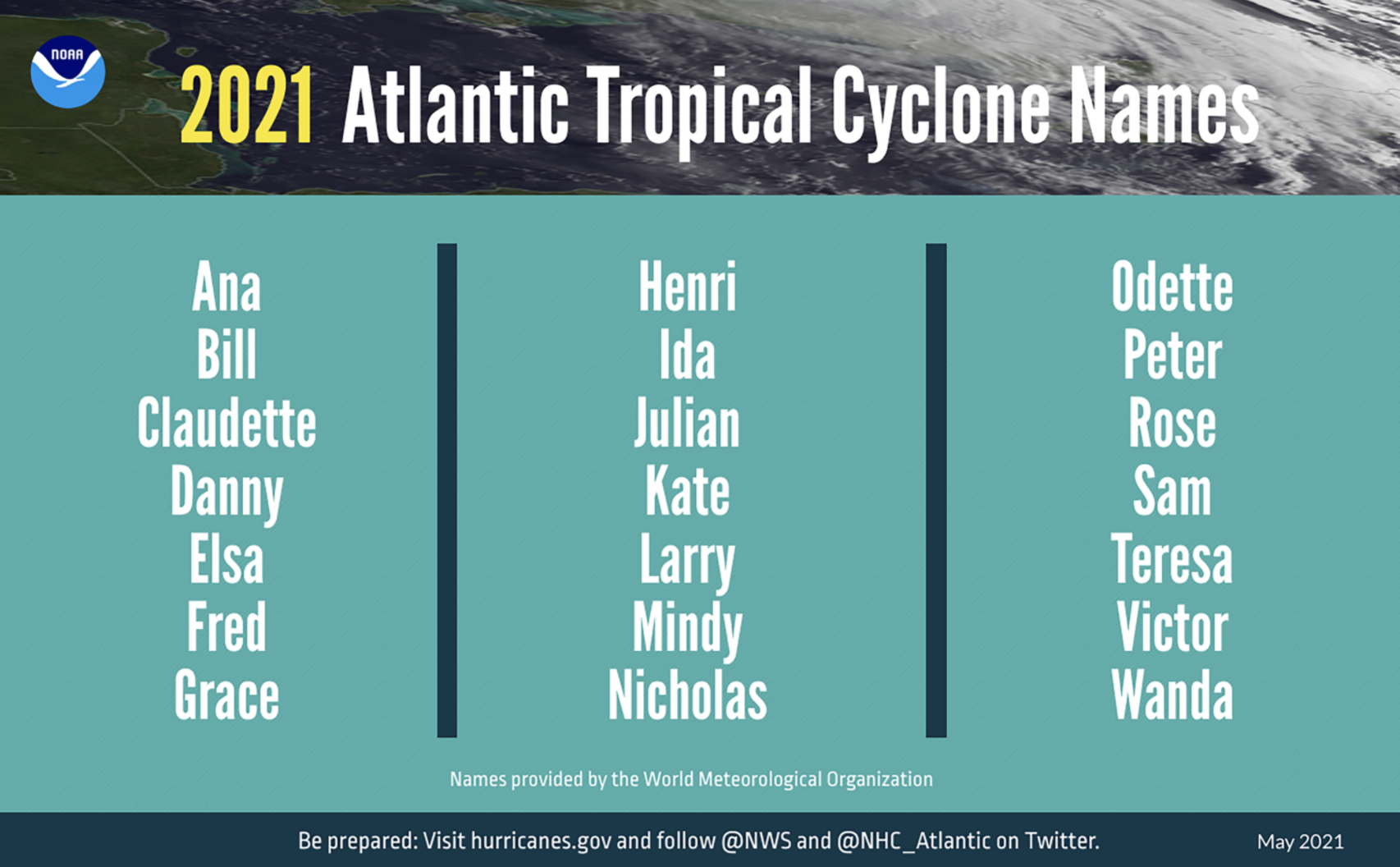 As can be seen, named storms occur in an alphabetical fashion. Arthur is crossed out because Arthur occurred in May. That’s unusual to have named storms before the official season begins on June 1.

What does all of this mean for me?

As interesting as the names and forecasts may be, what consumers really need to know besides the obvious “when is hurricane season” is how good is the insurance they are relying on for protection. Having good insurance is important. We often hear people talk about getting cheap insurance. However, it’s important to remember, no matter how cheap the insurance was, if it won’t pay a claim, it was a waste of money.

There are three important considerations, including:

How good is your insurance?

If you got ratings on your insurance above at the beginning of this post and those ratings weren’t good, change companies. We make it really easy by publishing the best insurance companies in each state. Just click the buttons below to find the best companies in your state.

Do you need flood insurance?

Is wind insurance included with homeowners, or is it separate?

Homeowners insurance typically includes wind insurance. However, the notable exceptions are largely in hurricane prone areas. In some places, like Hawaii, it’s typically completely separate insurance. It’s likely even a different insurance company. That said, in most places susceptible to hurricanes — like the coast of the southeastern US — you can get both wind and homeowners insurance from the same company. However, it may not be the same amount of coverage or the same deductible. Be sure to understand the deductible. Not understanding this could cost you tens-of-thousands of dollars. For more information on wind insurance, read our blog post titled, “How to Get Hurricane Insurance Without Getting Blown Away.”

Now for the Good News

The good news is we’ve spent years refining a grading system to let you know which companies are the best, and the system works. Even better news is that there are plenty of good options for companies you can buy excellent insurance from, at a fair price.

We Know if You’re With a Good Insurance Company

Even more important than knowing “when is hurricane season” is knowing if you’re with a good insurance company. Surprisingly, we’re the only company in the industry to analyze insurance companies for how they perform when paying claims. The difference between companies is significant.

The steps you need to take a are minimal. Did you already get a free rating? If not, do it now. If your insurance company scores well, tell your friends and family.

If the company doesn’t score well, go to our lists of the best companies in each state and shop with those companies.

2021 hurricane season forecast data collected from the NOAA website. NOAA is a division of the National Weather Service.

Note: ValChoice does not receive any form of compensation from insurance companies for rating them. Our analysis is independent and unbiased.

Dan has been a CEO or Vice President for high-technology companies for over 20 years. While working as a Senior Vice President of Marketing and Sales for a technology company, Dan was seriously injured while commuting to work. After dealing with trying to get insurance companies to pay his significant medical bills, or to settle a claim so Dan could pay the medical bills, he became intimately aware of the complexity of insurance claims. Dan founded ValChoice to pay forward his experience by bringing consumers, insurance agents and financial advisors easy-to-understand analysis needed to know which insurance companies provide the best price, protection -- claims handling -- and service.
View all posts by Dan Karr →
Best Home Insurance in Montana
Should I wear a helmet for my summer evening bike ride?