You are here: Home › View from the Helm of a “Sleeping Giant” – Kent Shantz 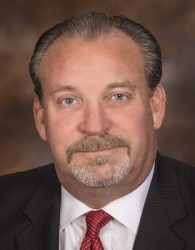 Kent Shantz has been blessed with much good fortune in his career. Kent’s hard work; focus on building strong relationships and “just doing the right thing” have undoubtedly been significant contributors to this good fortune. This article chronicles Kent’s career from his start as an independent agent through to his role as President and CEO of Rockford Mutual Insurance Company.

Success at Every Step

Starting out as an independent agent, Kent was given the challenge of starting a new office, from scratch. The office was in northern Michigan. Kent’s father – and agency owner – gave him a written premium goal that if met, would enable him to hire an assistant in 1.5 years. Amazingly, he reached the goal in six short months, a full year earlier than expected. That’s when the business really took off. With an assistant, Kent had the ability to sell commercial lines during the day and personal lines in the evening.

Kent’s introduction to the corporate world was as the Field Marketing Rep for the Auto-Owners. As the new hire, Kent was the low-man on the totem pole. Therefore, Kent was given the dubious honor of being assigned to the territory ranking a lowly 46thin performance. This was 46thout of only 50 territories. In one short year, Kent increased the territory performance to the 16thbest.

The stellar performance Kent achieved was rewarded with both recognition and opportunity. Opportunity came from having access and regular interaction with top management at a great company. This provided Kent the skills and foundation he has drawn upon throughout his career.

After spending time in marketing at another company that performs brilliantly for policyholders, Frankenmuth Mutual, Kent’s career led him to a Michigan exclusive company that sold through independent agencies. After fighting off a corporate takeover while there, the company sold to The Auto Club. However, The Auto Club wasn’t a good fit for Kent. Holding a strong belief that the independent agency model was, and is, the best distribution system for insurance, Kent was a bit of a fish out of water. Concerned the direct to membership model may prevail with The Auto Club, Kent knew he needed to move on. That decision is what led Kent to Rockford Mutual and the role of V.P of Operations beginning January of 2012.

Kent Shantz – Sowing the Seeds of a Sleeping Giant

With a history as a county mutual reinsurer, the vision for Rockford Mutual was to become a regional P/C carrier. Significant change was necessary to make the transition. Kent was instrumental in building the foundation upon which the change could take place. Building on his experience as an agent, and in the corporate world at both Auto-Owners and Frankenmuth Mutual, Kent helped drive the following initiatives:

A Sleeping Giant, “Poised to Takeoff”

With the team and technology in place, Rockford Mutual is now awakening their inner sleeping giant. Kent has a clear vision for the next phase of the company, including: managing strong relationships. Kent applies this philosophy to both agents and policyholders. Importantly, Kent is a firm believer in treating agents well and expecting high performance. For policyholders, Kent’s philosophy is to maintain an aggressive standard for rapidly and efficiently handling claims.

On the financial side of the business, Kent believes in sound underwriting and maintaining a strong balance sheet.

Kent’s enthusiasm when talking about Rockford Mutual is palpable. In his own words, he’s “having a blast.” When I asked Kent what’s the secret sauce for building a great P/C business he summarizes his philosophy into five short words, “Just do the right thing.”

The “Leadership Excellence” blog posts by ValChoice features CEOs of the best auto and home insurance companies. We identify the “best” companies based solely on how well they perform for policyholders. We aim to write profiles of the CEOs for all the best companies. There is no requirement to be a customer of ValChoice in order to be featured in our Leadership Excellence posts.

How can a 100-year flood happen so frequently?
Should I Change Insurance Companies?