You are here: Home › Yikes, Frozen Pipes. Will my Homeowners Insurance Pay? 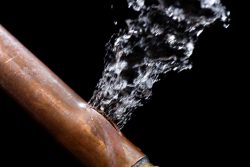 “Bomb cyclones” made the news this week. The question is, what do bomb cyclones and frozen pipes have in common? As many of us now know, the freezing cold causes frozen pipes.

If you’ve had frozen pipes you know they are no fun to come home to or wake up to. Now you need to figure out what happened and what to do about it. All this while dealing with the extreme cold. If there’s a way to make bad weather worse, frozen pipes are that way.

Find out how good your insurance company is by clicking the button below. Pay particularly close attention to the protection (claims handling) rating. This rating will let you know if you can expect help or resistance in settling your claim.

Will Insurance Pay for Frozen Pipes?

The answer to this question is both yes and no. As the homeowner, you need to understand both the yes and the no portions of the answer. Here’s why. Some insurers will not pay for the actual repair of the pipes that burst. In this case, the cost of the plumber is paid by you. That’s why the answer to the question “will insurance pay for frozen pipes” might be no.

Most insurers will pay for water damage. Therefore, damage to ceilings, walls, furniture, flooring, etc is typically covered by insurance. That’s good because damage to these other items often costs much more than it costs to repair the pipes.

Water Damage Claims Can be Tricky

Many insurance policies have special language dealing with water damage. This is because water damage, which includes frozen pipes, is a leading cause of homeowners insurance claims. According to the Insurance Information Institute, water damage and freezing resulted in the second most claims and the third largest average homeowners insurance claim for the years 2012 through 2016. The average claim amount for water damage during this time was $9,633. Importantly, this is a 9% increase over the $8,861 average for the four year period from 2011 to 2015.

You need to understand if “frozen pipes” are covered before filing an insurance claim for “frozen pipes.” If not, file the claim for “water damage.” Also, be sure that you weren’t negligent. For example, if you were away from home and turned the heat off while you were away, that’s negligence. Insurance is unlikely to pay in the case of your negligence.

There’s Water Everywhere. What do I do First?

While the action for getting everything dried out seems straightforward, you need to be careful. Typically, when you have frozen pipes, there are many other homeowners that have the same problem. Yes, when pipes freeze, they freeze in your neighbors homes too. Unfortunately, there are unscrupulous contractors that will try and take advantage of the situation. Therefore, you could end up with a contractor that over charges, or isn’t approved for work by your insurance company.

Even though you may not be able to meet with a claims adjuster on short notice, be sure to speak with a claims adjuster and find out which contractors they recommend for drying everything out. By the way, drying everything out is referred to as “mitigating water damage” in the insurance world. Once you know which contractors are used to working with your insurance company, contact them about drying everything out. Ask them to put a statement on their quote that the cost will not exceed what the insurance company considers to be reasonable and customary. This protects you from having to pay any extra charges. If they’re used to working with your insurance company, they will know what the reasonable and customary amount is. Most honest contractors should be willing to make such a note on the quote.

My Insurance Company is Being Difficult

Disappointingly, there are some insurance companies that will prove difficult in settling the claim. The reasons that lead to a difficult claims process vary, including the following. The company is experiencing financial pressure and needs to improve earnings. Alternatively, sometimes new management has come on board and has a different approach to claims payment. Whatever the reason, if you’re having difficulty, you may want an adjuster hired by you rather than the insurance company. The following is a listing of the different types of adjusters:

How to Avoid The Problems Frozen Pipes Bring

There are a number of proactive steps you can take to avoid having frozen pipes. Here are a few:

Don’t be fooled by TV ads. Here’s why. There is no check or balance to ensure the ads represent reality. Instead, positive statements about the companies performance are made simply to entice you into becoming a customer. Unfortunately, they don’t have to be based on truth and honesty.

Note: ValChoice grades every insurance company in every state. ValChoice does not receive compensation from insurance companies for grading them in our auto and home insurance report cards. Our analysis is independent and unbiased.

Dan has been a CEO or Vice President for high-technology companies for over 20 years. While working as a Senior Vice President of Marketing and Sales for a technology company, Dan was seriously injured while commuting to work. After dealing with trying to get insurance companies to pay his significant medical bills, or to settle a claim so Dan could pay the medical bills, he became intimately aware of the complexity of insurance claims. Dan founded ValChoice to pay forward his experience by bringing consumers, insurance agents and financial advisors easy-to-understand analysis needed to know which insurance companies provide the best price, protection -- claims handling -- and service.
View all posts by Dan Karr →
Best Car Insurance in Pennsylvania
Best Home Insurance in Oregon