You are here: Home › Hurricane Harvey is Here. Now What Do I Do? 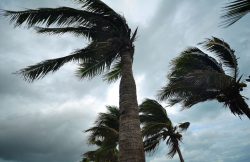 Hurricane Harvey arrived late last night. Unfortunately, Harvey made landfall with the full force of category 4 winds. Category 4 is defined as sustained winds above 130 mph. Can you imagine sustained winds blowing harder than if you put your head out the window of a car going significantly faster than most cars are capable of achieving? While such high winds may be unimaginable, the havoc Harvey wreaks is reality. It’s time for homeowners suffering damage to take a lesson on insurance from the victims of Hurricane Katrina, Superstorm Sandy and other major storms,

Here’s the lesson: Damage from hurricanes comes from wind and water. In this case, water means flooding, not broken pipes. Homeowners insurance rarely covers flooding. Flood insurance is purchased separately. Therein lies the problem people face after a hurricane. Did flood waters or wind cause the damage?

Winds or Flooding. Which Did Hurricane Harvey Deliver First?

On the question of what came first, winds or flood water? Wind, obviously, is the common answer. However, that simple answer doesn’t mean you will be able to collect on a homeowners insurance policy. It’s likely some insurance companies already have teams of technical experts on site in Texas. These experts are ready to perform their “scientific” studies that prove the flood waters arrived before the wind caused any damage. Policyholders need to prepare for this possibility with Harvey.

Here’s how you prepare. First, document the wind damage to your home. Particularly if you can take pictures that show wind damage and no water damage. Take those pictures now. Next, get neighbors involved. Work with neighbors to help each other get pictures so you all have more complete and thorough documentation proving the wind damage was first. If possible, take notes to make sure you don’t forget important events.

Next, call local media outlets. The media is looking for stories. Get TV or news stations to film or photograph wind damage, before the flooding takes place. This will function as independent that the winds came first. Finally, act quickly. There are many days of rain coming. The flooding situation will continue to worsen.

It All Comes Down to Money

When the dollar amount of the damage is large, recovering the losses is more difficult. The losses caused by Hurricane Harvey will be large. A tried and true method for homeowners insurance companies to avoid losses is to “prove” the damage was caused by flood waters. Homeowners need to be prepared for this possibility.

Note: ValChoice does not receive any form of compensation from insurance companies for presenting them as a good option in our car and home insurance reports. Our analysis is completely independent of the industry.

Dan has been a CEO or Vice President for high-technology companies for over 20 years. While working as a Senior Vice President of Marketing and Sales for a technology company, Dan was seriously injured while commuting to work. After dealing with trying to get insurance companies to pay his significant medical bills, or to settle a claim so Dan could pay the medical bills, he became intimately aware of the complexity of insurance claims. Dan founded ValChoice to pay forward his experience by bringing consumers, insurance agents and financial advisors easy-to-understand analysis needed to know which insurance companies provide the best price, protection -- claims handling -- and service.
View all posts by Dan Karr →
ValChoice Launches Service for Finding the Best Car Insurance
What Prices Go Up Faster Than Health Insurance? Home Insurance!