You are here: Home › How to Protect Yourself from an Uninsured Motorist 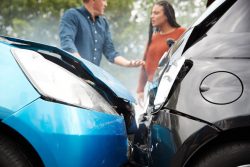 Unless you live in the “Live Free or Die” state (NH) or the “Sic Semper Tyrannis” state (“Thus Always to Tyrants” – VA), state law requires you to have car insurance. However, on average, one in eight drivers don’t comply with this law. What can you do to protect yourself from this dangerous hazard?

How bad is the uninsured motorist problem?

According to the most recent report published by the Insurance Research Council, 13% of drivers (one in eight) was uninsured in 2015. Since 2015 a couple of significant changes have taken place that ValChoice believes is likely to drive this number higher.

To put into perspective how bad the uninsured motorist problem is, think about being at a four-way stop. If there are two cars at each of the four stop signs, one of these drivers does not have insurance.

What’s the impact of uninsured motorists?

Though most states require drivers to have car insurance, there are still motorists who take their chances and drive without coverage or with insufficient coverage. Nationwide, an estimated 13 percent of drivers are uninsured, and, in a handful of states, that figure tops 20 percent, according to the Insurance Research Council. With such high uninsured motorist rates, know how to protect yourself from an uninsured driver is necessary.

States have threatened uninsured drivers with fines, license plate confiscation and other penalties. Some states are even using databases to better identify motorists who lack insurance.

Still, the problem persists, and it can be costly for responsible drivers who do have insurance.

If you have an accident with a driver who doesn’t have insurance or lacks sufficient coverage, you could find yourself on the hook for thousands of dollars in medical expenses and repair costs, regardless of who’s at fault.

Protect Yourself from an Uninsured Driver

There is extra insurance drivers can buy to protect themselves from uninsured motorists. Nearly all car insurance companies offer this. It is optional. However, if you don’t have this insurance, you will likely personally have to pay the expenses.

Many readers may be thinking “I can just sue the person who caused the accident.” Unfortunately, that rarely works. Oftentimes, uninsured motorists are uninsured because they’re short on money. If they have no money or assets, there is nothing that can be recovered in a law suit.

Buying uninsured and underinsured motorists’ coverage can ease your fears and pay off if you have an accident. The insurance pays for medical expenses, lost wages and pain and suffering from injuries sustained in a car wreck. If you purchase uninsured motorist property damage insurance, you also get coverage for vehicle repairs and damage to valuables that were in your car at the time of the accident.

Though states require drivers to have auto insurance, the liability requirements vary greatly from state to state. In states that have low minimum insurance requirements, drivers often don’t have the coverage to deal with a serious car accident. If you live in one of those states, you should verify what limit of uninsured and underinsured motorists’ coverage you have. Mississippi, Alabama, California, New Mexico, Arizona and Tennessee traditionally have had the highest percentage of uninsured motorists.

I personally have been in two accidents caused by others. One an uninsured driver, one an underinsured (not enough insurance to cover the expenses) driver.

This was a minor accident. The uninsured driver rear-ended us and caused about $2,000 of damage. The insurance company was excellent. They promptly took care of everything and waived our collision deductible.

This was when I was hit while riding a bicycle. My insurance covered me as a bicyclist for an underinsured motorist. However, the experience was a nightmare. They refused to pay. I had to hire an attorney. That accident is the reason I founded ValChoice.

The point of these two personal stories, always make sure you’re with a good insurance company. How do you do that? If your free rating from the button above wasn’t good, then click the button below to find the best insurance companies in your state.

Want to know a fair price for your car insurance?

Dan has been a CEO or Vice President for high-technology companies for over 20 years. While working as a Senior Vice President of Marketing and Sales for a technology company, Dan was seriously injured while commuting to work. After dealing with trying to get insurance companies to pay his significant medical bills, or to settle a claim so Dan could pay the medical bills, he became intimately aware of the complexity of insurance claims. Dan founded ValChoice to pay forward his experience by bringing consumers, insurance agents and financial advisors easy-to-understand analysis needed to know which insurance companies provide the best price, protection -- claims handling -- and service.
View all posts by Dan Karr →
How do I find car insurance near me?
Father’s Day in Intensive Care Changing a Trillion $$ Industry