You are here: Home › Does the underinsured motorist problem affect me? 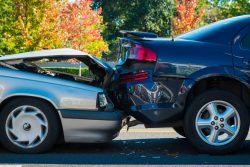 By Dan Karr on May 27, 2020 in Car Insurance blog, Consumer Insurance Information 0

If you had an accident on the way to work, would insurance cover your expenses? Surprisingly, many people don’t know the answer to this question. They think they would have adequate protection, but don’t actually know. In an accident caused by an underinsured motorist, you might be out of luck.

Here are some surprising statistics. One-third of all drivers in the U.S. can be characterized as an underinsured motorist. This is significant because one-third equals one in three cars. In other words, if you’re involved in a three car accident, the odds are that one of the cars will be underinsured. If the underinsured car is the one that caused the accident, this could be a big problem for you.

What is an underinsured motorist?

ValChoice defines an underinsured motorist as a driver who meets any one of the following three criteria:

How many drivers are underinsured or uninsured?

The nationwide average is one in eight drivers are uninsured. These drivers defy state laws and do not buy car insurance. Read our blog “What’s Worse Than an Uninsured Motorist” for more information on this part of the problem.

Making matters worse, data from Verisk Analytics* shows that approximately one in five drivers buys the minimum coverage. Combined, the percentage of uninsured and underinsured drivers equals one-third (33%) of all drivers.

How will the pandemic affect uninsured and underinsured motorists?

A worsening economy is likely to produce increasing levels of both uninsured and underinsure motorists. The reason is simply that as money gets tight, drivers have to make tradeoffs. Unfortunately, no insurance – or not enough – may be what gets dropped to save money.

One Cause of the Underinsured Motorist Problem

Consider this situation. The medical cost covered by the average of state minimum coverage amount is $49K per accident. An accident that results in more than a couple people being admitted into a hospital would surpass the $49K average coverage in a couple days. However, under minimum coverage laws, the insurance company of the person that caused the accident has no legal liability beyond this coverage amount.

The Problem is Exacerbated by Technology

Technology has enabled insurance companies to more accurately assess the risk associated with any given driver. The fastest growing companies have used this capability to attract customers. The offer these companies present to drivers is unique in a couple ways:

These two factors are contributing to the commoditizing of auto insurance. Unfortunately, the commoditization is at the expense of the better insurance companies. “Better” defined as companies offering excellent claims handling and service.

Want to know the best car insurance companies in your state? It’s easy. Just click the button below. The information is free.

The Scope of the Problem

These coverage amounts are nowhere close to the amount necessary to cover the costs of a serious accident. More than a single day in intensive care would consume the full medical coverage for one person. For property damage, anyone driving a reasonably new car can easily have more than $16K in repair or replacement costs.

This solution is not proposing exorbitantly high minimum limits. When limits are excessive, problems with excessive litigation emerge. The objective of this solution is to strike a balance between the two extremes that results in a healthier industry.

ValChoice believes anyone required to buy a product or service deserves to know the quality of the service they must buy. Transparency has never before been available for insurance. Technology drives the change that makes transparency possible. Hence, our mission is to provide this much needed information to consumers.

Unfortunately, most people don’t know if they buy insurance from a good provider. Finally, it’s possible to know. The ValChoice analytics engine grades companies on value, claims handling and service.

* Verisk Analytics, ISO division is a source of information about property/casualty risk, https://www.verisk.com/insurance/brands/iso/

Dan has been a CEO or Vice President for high-technology companies for over 20 years. While working as a Senior Vice President of Marketing and Sales for a technology company, Dan was seriously injured while commuting to work. After dealing with trying to get insurance companies to pay his significant medical bills, or to settle a claim so Dan could pay the medical bills, he became intimately aware of the complexity of insurance claims. Dan founded ValChoice to pay forward his experience by bringing consumers, insurance agents and financial advisors easy-to-understand analysis needed to know which insurance companies provide the best price, protection -- claims handling -- and service.
View all posts by Dan Karr →
Will my auto insurance company find out?
Best Car Insurance in Connecticut