You are here: Home › The Type of Car Insurer That Delays and Denies Insurance Claims 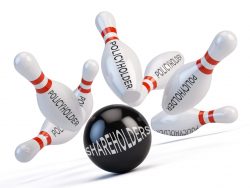 On November 18, 2016 the New York Times[1] reported on the ValChoice Report that identified and quantified the economic conflict that exists between policyholders and shareholders of publicly traded auto insurance companies. This new report is an update to those earlier findings with three key points. 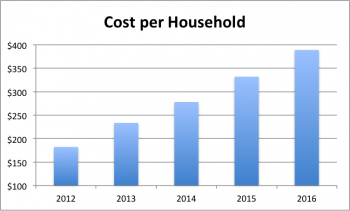 Despite the fact that publicly traded car insurance companies have a lower product quality (as measured by value and the frequency with which the company delays and denies valid insurance claims) than competitors, they continue to gain market share. This is in contrast to mutual companies who offer better quality, yet continue to experience declining market share. Reasons for this phenomenon, and what can be done about it, are discussed in the conclusions section of the report.

Consumers are required by law to buy vehicle insurance. With the five-year trend of declining value for the insurance consumers must purchase, it’s imperative that regulators and lawmakers take action to ensure consumers are getting the protection they are mandated to purchase.

Helping consumers get quality protection and a good value from their insurance can be achieved by bringing transparency to the insurance industry. While not the only possible solution, transparency will deliver consumers the protections and information they deserve when buying services to protect their financial future. Furthermore, transparency is the most cost-effective method for delivering this information.

Click this link to get more information in insurance in your state.

Click this link for an infographic summarizing this report.

The ValChoice analysis included 67 publicly traded auto insurance companies and 114 mutual insurers.[2] Excluded from the examination are the 99 closely held, or privately owned, auto insurance companies. While the closely held carriers are large in number, the collective market share is small. The small market share results in a relatively minor effect on competitive dynamics. Also excluded are non-profits and government entities, for the same reasons.

In 2016, the 181 companies examined represented 93% of the U.S. car insurance market. The company types were grouped into the following three categories: 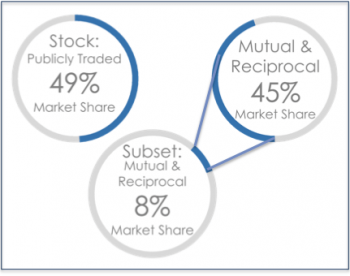 Image 1: Market share breakdown. Stock and Mutual combine for 94% of the market. The 8% shown at the bottom of the image is a subset of the mutual market segment.

First, each of the 181 mutual and publicly traded U.S. private passenger auto insurance companies that sold car insurance in the last five years were assigned to the categories identified above. The analysis then compared the percentage of earned premiums net of dividends to policyholders, per year, that were paid out in loss compensation. This ratio is the Paid Loss Ratio (PLR)[5]. 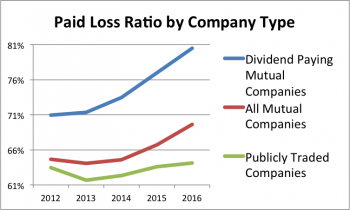 In 2012, mutual companies had a 3% higher paid loss ratio than publicly traded companies. With the exception of a minor dip in 2014, the difference continued to increase in subsequent years. By 2016, this comparison had increased to a difference of nearly nine percent. 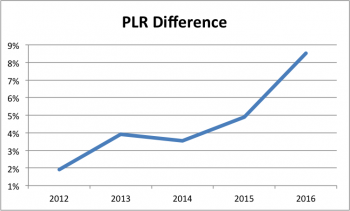 Chart 3: The percentage increase in PLR for the mutual category of companies as compared to publicly traded.

As can be seen in chart 3, the magnitude of the value gap more than quadrupled in the five-year period from 2012 to 2016. 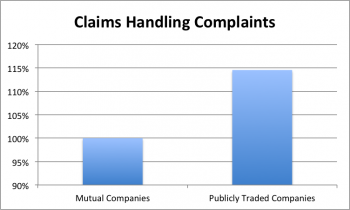 Chart 4: Difference in confirmed complaint volume during the five-year period from 2012 through 2016. Higher complaint ratios indicate a higher frequency, per dollar of earned premium, of insurance claims subjected to delays or denials. This measurement is strictly for insurance claims deemed to be legitimate insurance claims.

Little Uniformity Within Categories of Companies

While there is a clear difference in operating methodology between publicly traded companies and mutual companies, this does not imply there is synergy between companies of a single type. Chart 5 shows the variance in PLR between two large[7] mutual companies. Both companies enjoy a similar and a significant percentage of the overall auto insurance market. 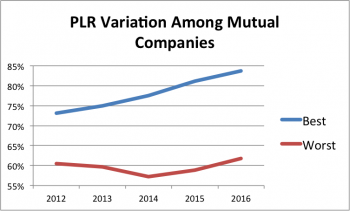 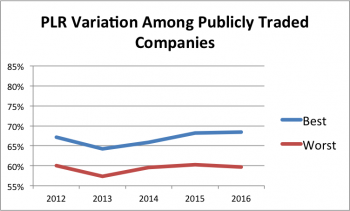 The analysis concluded that the lowest performing mutual carriers and the lowest performing publicly traded carriers offered a similar value proposition and a similar claims experience. The notable difference was that the high value, good claims experience segment of the mutual market was almost non-existent in the publicly traded carrier market segment.

Changes in Market Conditions Over the Five-Year Period

The industry experienced an increase in loss ratios beginning in the year 2014. Reasons for increasing loss ratios were in large part due to more insured losses (accidents to cover). For some companies, more aggressive pricing was also a factor. Considering only the trend toward increasing losses rather than pricing, the following are three of the reasons cited for the increasing losses.

Two, some studies show that distracted driving is leading to an increase in both accident rates and accidents involving personal injury. Three, the cost of repairing damaged vehicles is rapidly increasing.

Despite offering less value and a more difficult insurance claims experience, publicly traded auto insurers are gaining market share. As can be seen in chart 7, the market share gains are at the expense of mutual companies. 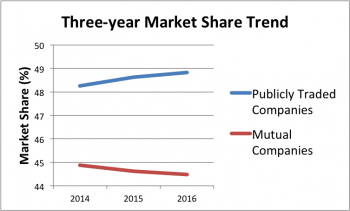 Chart 7 shows the difference over the three-year period from 2014 through 2016.

Why the Shareholder Always Tops the Policyholder

For a company focused on gaining market share, aggressive pricing and consequently a higher PLR are expected. The question is: Now that they have become the second-largest auto insurance company in the country, when will their focus begin to change?

One early indicator of change could be when the now famous slogan “15 minutes could save you 15% or more” begins to disappear. Replacing advertising campaigns focused on cost savings in favor of campaigns emphasizing reliability or stability makes sense in markets where the company is in the number one market share position. New York and New Jersey, 30% and 20% market share respectively, are two markets that could be an early indicator of the longer term GEICO strategy.

Using PLR data, ValChoice calculated that approximately an $80 increase per vehicle insured would bring the GEICO loss ratio in line with the publicly traded market segment. In 2016, this would have translated into incremental revenue amounting to $2.26 billion. With a P/E of approximately 20, this revenue increase translates into a $45 billion increase in market cap. Increasing the wealth of shareholders by $45 billion is rarely as easy to find as it is in this situation.

The loser is the policyholder. Once GEICO makes its move to capitalize on the long-term investment made into building market share, price pressure is reduced across the entire industry. This leads to a less competitive market, and an unfortunate situation for the consumer.

The Cost to Consumers

This extreme cost, born entirely by consumers, has grown year over year for each of the six years ValChoice has examined for this and prior reports.

The worst examples of the cost to consumers is when their insurer delays and denies legitimate claims. Until now, there has been no meaningful analysis showing which carriers have the highest frequency of insurance claims delays and denials.

The root cause of these problems is a direct result of the lack of transparency in the insurance industry. Solving the problem is addressed in the conclusions that follow.

Companies have mission and value statements that state shareholders and customers are treated with equality. However, in reality, executive compensation gets unequal consideration when business decisions are made. The more dollars that are at stake, the more unequal the various parties become. Particularly when it comes to products and services they are mandated to buy, consumers deserve transparency into how companies operate.

The low frequency of interaction on insurance claims-related issues makes it nearly impossible for consumers to experientially assess the quality of the insurance products they buy. This low level of product interaction creates branding opportunities through advertising for companies with the financial means to undertake large-scale advertising campaigns. With little or no reliable information available on actual company performance, these branding campaigns drive both market share growth and customer loyalty.

For the singular reason that consumers are required to buy insurance, consumers deserve unbiased, independent information characterizing the performance of the companies from whom they buy. Without such checks and balances in place, market share will continue to migrate to the companies with the largest advertising budgets. As market share migrates to companies with lower quality products, competitive dynamics are reduced and the overall decline in product quality will continue.

The solution to this problem is relatively easy and involves increased transparency. More information should be both collected and made available to data services working to provide transparency into the operation of insurance companies. Lawmakers and insurance regulators need to embrace and actively promote making more information available for the public to use in assessing insurance providers.

ValChoice® is the only company to provide consumers, agents and advisors with information on which home and auto insurance companies offer the best price, protection and service.  The company’s advanced analytics platform collects and analyzes millions of data points and delivers the results in an easy-to-use service that Forbes Magazine describe as “Carfax for insurance.”  Using ValChoice, consumers are finally able to shop for insurance based on value rather than making decisions blindly based on price or advertising campaigns.

ValChoice offers free reports on auto and home insurance companies to everyone. Click the button below below for the type of report you want. To get information on claims handling performance, select the Premium option. The premium option includes a grade comparing companies to their peer group on the frequency with which the company delays and denies claims.

Note: ValChoice does not receive any form of compensation from insurance companies for presenting them as a good option in our car and home insurance comparison reports.

[3] Reciprocal Exchange and Co-operative companies are included in the category of Mutual Company. Due to the nature of the ownership structure, the New Jersey Manufacturers Group and the Westfield Group are also included in this category.

[7] For the purposes of this analysis, “large” companies were defined as holding a minimum of 3% market share, nationwide. Companies below this threshold were not included in the analysis of PLR performance within company types.

Dan has been a CEO or Vice President for high-technology companies for over 20 years. While working as a Senior Vice President of Marketing and Sales for a technology company, Dan was seriously injured while commuting to work. After dealing with trying to get insurance companies to pay his significant medical bills, or to settle a claim so Dan could pay the medical bills, he became intimately aware of the complexity of insurance claims. Dan founded ValChoice to pay forward his experience by bringing consumers, insurance agents and financial advisors easy-to-understand analysis needed to know which insurance companies provide the best price, protection -- claims handling -- and service.
View all posts by Dan Karr →
What Prices Go Up Faster Than Health Insurance? Home Insurance!
ValChoice Report Identifies Car Insurers That Delay and Deny Insurance Claims