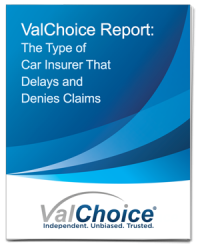 BEDFORD, N.H. — ValChoice, the only analytics company to asses insurers for their willingness to pay claims, today released a new market report highlighting how publicly traded insurance companies are more likely to delay and deny valid insurance claims compared to mutual companies. This report builds on a 2016 ValChoice report covered by the New York Times quantifying the rapid increase in the value gap between publicly traded and mutual insurers. The new data shows that in the last year, the total of the value gap over the five-year period the report covered, grew more than 20% to a staggering $123 billion. Click here for the complete report.

“For the first time, consumers can know which companies are good about paying claims, and which are not,” said Dan Karr, founder and CEO of ValChoice. “With so many consumers dealing with insurers following the recent tragedies of hurricanes Harvey and Irma, we’re pleased we can provide free information that helps consumers know which companies have a history of being difficult in the claims handling process. Leveling the playing field between consumers and powerful insurers is a much needed service.”

ValChoice® is the only company to provide consumers, agents and advisors with information on which home and auto insurance companies offer the best value: price, protection and service. The company’s analytics platform collects and analyzes millions of financial and complaint data points and delivers the results in an easy-to-use service that Forbes Magazine describe as “Carfax for insurance.” Using ValChoice, consumers are finally able to shop for insurance based on value rather than making decisions blindly based on price or advertising campaigns.
##
Contact:
pr@valchoice.com

Copyright 2017. All rights reserved. ValChoice and the ValChoice logo are registered trademarks of ValChoice, LLC.

Dan has been a CEO or Vice President for high-technology companies for over 20 years. While working as a Senior Vice President of Marketing and Sales for a technology company, Dan was seriously injured while commuting to work. After dealing with trying to get insurance companies to pay his significant medical bills, or to settle a claim so Dan could pay the medical bills, he became intimately aware of the complexity of insurance claims. Dan founded ValChoice to pay forward his experience by bringing consumers, insurance agents and financial advisors easy-to-understand analysis needed to know which insurance companies provide the best price, protection -- claims handling -- and service.
View all posts by Dan Karr →
The Type of Car Insurer That Delays and Denies Insurance Claims
Will Harvey, Irma and Maria Affect My Home Insurance Cost?