You are here: Home › How do I Have the Best Fourth of July Fireworks? 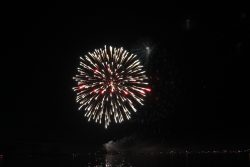 Fourth of July. What a great holiday. Family, friends, good food and drink. Celebrating our freedom is of course the reason for the fourth of July holiday. Here in New Hampshire we take our freedom seriously. Just how serious we are about freedom is best captured in our state slogan, “Live Free or Die.” Undoubtedly, being free, or dying, is a strong commitment to freedom.

We exercise that freedom year ’round. However, it’s rarely on display more than on the fourth of July. Here’s an example of irony of our state slogan: It’s legal to buy fireworks here in New Hampshire. However, it’s not legal to set them off. Well, if we’re allowed to buy something, it’s a bit obvious that people are going to do something with the fireworks they just bought.

In my neighborhood, either nobody knows that setting off fireworks is illegal. Or, nobody cares.

Whatever the laws may be in your state, we put together a list of how to stay safe this fourth of July. Read on, this list is both true, and fun.

Rules to Live by This Fourth of July

These tips may sound like I’m trying to be funny. I’m not. The logic and the data behind each tip is explained below:

Put a Woman in Charge

With fireworks, men are 1.56 times more likely to be injured than a woman. No surprises there, right? Knowing that women are less prone to be injured with fireworks is the reason we’re choosing a woman to supervise.

Again, no big surprises here. For everyone’s safety we now know that the woman in charge should be at least 25 years old.

Take Care of the Children

Children ages five and below are the second most likely to be injured. Unfortunately, the young children had only a slightly lower probability of getting hurt than the young adults. This is troubling since the children are purely victims and not the instigators.

Overall, children 15 and below had a higher probability of being injured by fireworks. Be sure to supervise them carefully.

The obvious question to ask is if children five and under are the second most likely to be injured, who’s most likely? Yes, it’s the young adults, 20 to 24. Hence, the woman in charge is 25 or older.

Undoubtedly, this is the most boring recommendation of all. However, most injuries are burns. The instructions on each type of fireworks should explain the proper handling and lighting procedure, significantly reducing the chance of a burn.

When it comes to fireworks, anyone 24 and under that doesn’t like to read should be kept far, far away. You might consider sending them to the library to brush up on their reading this July 4. 😉

How Good is Your Insurance?

The data we use to analyze companies comes from state insurance departments. Without doubt, this is the highest quality data available on insurance companies. Be an informed shopper by getting a free report on your insurance company. If it’s good, tell a friend. If it’s bad, switch companies.

Click the button below to order a rating on your current insurance company, or any company from whom you’re considering buying insurance. Be sure to checkout your car and home insurance companies. Now you can actually know how good they are before something happens, like a fireworks rocket being accidentally shot through a window. Do it now, because you don’t want to find out after it’s too late that your insurance isn’t great.

Note: ValChoice does not receive any form of compensation from insurance companies for grading them in our auto and home insurance report cards. Our analysis is independent and unbiased.

How Often Should I Change Insurance Companies?
When do Car Insurance Prices Increase the Fastest?