You are here: Home › Holiday Parties – Has The Driver Had Too Much Eggnog? 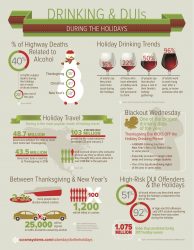 What a great time of year. The season is filled with holiday parties, friends and family to see, music to listen to and presents to give and receive. This is all good, unless you have too much eggnog before getting behind the wheel. That can put a serious damper on the fun.

Statistically speaking, the “season of holiday parties” could also be called the “DWI season.” According to the Law Dictionary[1], New Years Eve has the most arrests for suspected driving under the influence of any day of the year. However, the entire period from the day before Thanksgiving through the 1st of January is fraught with drunken drivers.

Sometimes people want to let loose and have a good time. Maybe they even feel they need to let loose. The holidays are as good a time as any for doing this. However, if that’s you, do it responsibly. Either have a friend that will be disciplined about not drinking be your driver for the night. Alternatively, you can use a service like Sober Ride to get you home safely. Taxis and other similar services are also a possibility.

It’s bad enough that nearly one-third of all auto related fatalities are alcohol related. Even worse is the fact that in 2015 of all the driving fatalities that included children ages 0 to 14, 16% involved an alcohol-impaired driver[2]. We weren’t able to find statistics on the rest of the family, but it’s not necessary. Even the thought of the death of a child due to a drunken parent or guardian is terrible.

Minimizing the chance of suffering the problem of a drunken driver is actually easy. Start by by having a clear plan on how everyone will get home once the party ends. Your plan should include ride alternatives such as those suggested above or friends or relatives.

Defending Yourself Against Those Leaving Holiday Parties

Not surprisingly, most of the accidents occur between the hours of 9 p.m. and 6 a.m. While these hours represent only 38% of the day, this nine-hour period is when 59% of the fatal accidents involving alcohol occur[3].

One approach to increasing your odds of surviving the drunks leaving holiday parties is to travel during the daytime. This doesn’t reduce the risk to zero, but it substantially improves your odds.

Another defensive approach is to not drive a small vehicle. When there’s an impact, passengers in small vehicles will sustain more injuries. This is a simple matter of physics. A larger vehicle is able to absorb more of the impact form another vehicle.

The Holiday Parties Season Compared to The Rest of The Year

The Cost of a DUI

According to the website onedui.com, the first driving under the influence charge typically costs around $10,000. This includes legal fees, fines, increased insurance costs, etc. $10K is a heavy incentive to stay of the DUI list this Christmas.

In the 1970’s approximately 60% of automobile fatalities were a result of alcohol impaired driving. That statistic has been significantly reduced to approximately 30% in recent years[4]. Significant progress was made in the early years of educating people on the consequences of driving while intoxicated. However, in recent years continued progress has proven difficult to achieve. In fact, some activities such as recreational boating have seen increases in the number of alcohol related deaths.

To further reduce fatalities from drunken driving will require more punitive measures. Driving to a zero tolerance level for driving impaired may be necessary. Also, lawmakers must quickly recognize the impact of marijuana on impaired driving and apply similar measures to protect people.

Consumers have had no visibility into this as an issue. In fact, most consumers have no idea where to go to get information on the quality of the insurance they buy.

At ValChoice we believe this is a serious issue. Insurance is the last line of defense for most families. If an insurance company refuses to pay a legitimate claim, many families will be forced to file bankruptcy. My personal experience with insurance companies that refused to pay my claim changed my life. I gave up my career and founded a company determined to prevent this problem from impacting other families.

The infographic for this post was provided by SCRAM Systems. https://www.scramsystems.com/holiday-drinking-and-duis-resources-from-scram/

A Guide to Surviving the Holidays – Nine Tips for Families
There’s a Snowstorm Coming. Are You Ready?