You are here: Home › Home fires: what can I do to avoid a house fire? 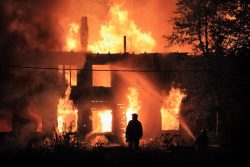 When  people think of home fires, images of California wildfires destroying everything in their path come to mind. However, the statistics of home fires paint a very different picture. In fact, the answer to the question “What can I do to avoid having a house” is that there are several steps you can take.  Surprisingly, statistics show that having a house fire is largely “up to you.”

Statistics on house fires show that even though accidental, most home fires are caused by the homeowner or the renter. Here’s a breakdown of the most common causes for a house fire:

The Frequency of Home Fires is Decreasing

Fortunately, home fires are decreasing in frequency. Using a five-year moving average, the frequency of home fires has steadily declined, as shown below:

The Number of Home Fires is Still Too High

While the long-term trend is good, homeowners and renters being more careful will lead to a significant improvement.

How good is your insurance if you suffer a home fire?

Until now, people had no way of knowing how good their insurance was, until it was too late. After a home fire occurs, some companies pay the replacement cost with no drama. However, some companies force policy holders to hire lawyers and fight for years to recover the damages. Finally, the data exists on how good every company is about paying claims.

Dan has been a CEO or Vice President for high-technology companies for over 20 years. While working as a Senior Vice President of Marketing and Sales for a technology company, Dan was seriously injured while commuting to work. After dealing with trying to get insurance companies to pay his significant medical bills, or to settle a claim so Dan could pay the medical bills, he became intimately aware of the complexity of insurance claims. Dan founded ValChoice to pay forward his experience by bringing consumers, insurance agents and financial advisors easy-to-understand analysis needed to know which insurance companies provide the best price, protection -- claims handling -- and service.
View all posts by Dan Karr →
Should I buy umbrella insurance?
Does my home need a lightning rod to protect from lightning strikes?