You are here: Home › How often should I change insurance companies? 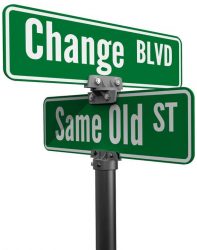 The interaction between consumers and insurance is, at best, strange. Most consumers don’t want to change insurance companies. However, the converse is also true. Many consumers wonder if they should stay with the same insurance company. You may be asking “How can this be possible?” Here’s how.

Many consumers believe that insurance companies aren’t, or may not be, trustworthy. Therefore, they aren’t sure they can trust their insurance company. At the same time, in part due to the negative feelings they harbor about being required to buy insurance, they don’t want to put time and effort into changing companies.

At ValChoice, we make shopping easy. Just click the button below to find the five best insurance companies in your state.

Making matters worse, there has been a dearth of reliable information available to the public on how insurance companies operate when it comes to protecting policyholders. This leads to a dilemma. Other than price, why change insurance companies if there’s no way to know if the next company is better than the current company?

I Confess – I Made This Mistake

Historically, consumers have typically decided when to change insurance companies based on the following two items:

Both of these reasons for changing companies are reactive. They’re after the fact. Now there’s a better way, a proactive way, to know when it’s time to change insurance companies.

Yes, I made this mistake. I fall into the second category above. For me the trigger to change insurance companies was when I had to hire a lawyer to collect on a legitimate claim. That process was expensive, time consuming and a truly miserable experience.

How is it possible to know when to change insurance companies?

I once had an independent insurance agent tell me he changes insurance companies every three years. That statement shocked me. As an independent agent, his job is to know which insurance companies are offering the best service and the most competitive rates. If he knew that information, why would he shop every three years? Instead, choose the best and stick with them. Stick with them as long as the service remains good and the price is fair. After all, that’s what most people would prefer to do.

Now having several more years of both analytical and practical insurance experience, the statement from the independent agent no longer shocks me. In reality, the insurance industry is largely driven by perceptions. The reason for this is that for most consumers there is a low level of interaction with their insurance company. This means a good service experience from 10, 20 or even 30 years ago that your parents or grandparents recall can create a positive impression.

The Role of Advertising and User Surveys

Some companies work to create these positive impressions with a massive advertising budget. Because the level of interaction is low, that works. Until now there has been little meaningful information on which to make better, more proactive, decisions. User surveys and reviews are often the “go to” source of information. Unfortunately, in many industries – including insurance – they are often accused of being pay-to-play schemes.

At ValChoice we analyze large quantities of high quality data. We routinely compare our results with anecdotal information from industry insiders as well as user survey results. The bottom line is, we’re glad we don’t have to defend user survey and consumer review results as not being pay-to-play. Unfortunately, nobody seems to challenge the companies using these approaches. The reality is these are generally schemes designed to make money for company owners as the number one priority. That’s a much different objective than working to than to protect consumers.

Even agents have limited information. The number of data points an agent has to form an opinion is more than the consumer, but often too few to reliably assess a company. Also, among the larger carriers, the agent has been removed from the claims process. This limits the agents’ visibility into how well the company is actually performing.

Lack of Transparency has Consequences

The consequences of this lack of transparency are multiple. The following are two of the most important consequences.

First, many consumers are primarily interested in a better price for the insurance they must buy. This constant recycling of the same shoppers looking for a better price leads many to believe consumers only care about price. This plays right into the narrative the largest companies promoting price, price and price. In reality, two-thirds of the market actually doesn’t care that much about price. See the chart below showing the frequency with which people shop their car insurance. 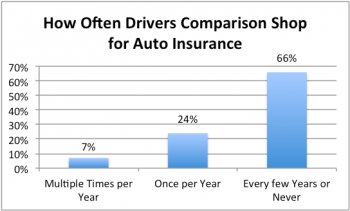 While agents continuously hear from consumers that price is all that matters, a strong majority of the market isn’t shopping for price. Most people want a fair price. However, the dearth of product quality information makes it impossible to determine what constitutes a fair price.

Lack of Transparency Isn’t Only Bad for Consumers

The other group hurt by the lack of transparency is the insurance industry itself. Here’s an example of how. At ValChoice, we did an informal analysis of companies attending a recent industry conference. We identified 50 of the best companies represented at the trade show that we wanted to meet. Our criteria for identifying the companies was that they provide a fair price, exceptional claims handling and good service. Then we looked at how many of those companies were gaining or losing market share. Two-thirds of these best companies were losing market share. This reality is worrisome. Companies that are doing the best job for consumers deserve to be widely recognized for their efforts.

The beauty of data and analytics is that it’s possible to paint an accurate picture of how companies operate. After all, that’s why insurance companies collect data on you. They want to know how much of a risk you are to insure. You should want to know the same about your insurer.

Finally, knowing when it’s time to change insurance companies is easy. Now the tables have been turned. You can now know how much of a risk you’re taking by placing your business with a particular company. This is important information. After all, insurance is your last line of defense. If your insurance doesn’t protect you, most people would end up flat broke.

Here’s how to find out about an insurance company you currently buy from, or one you’re considering. Click the button below for the type of insurance you want to check out.

Note: ValChoice does not receive any form of compensation from insurance companies for presenting them as a good option in our car and home insurance reports.

The lack of action that brings change is a huge benefit to the insurance industry. Hundreds of billions of dollars are spent each year simply as a result of inertia. The following are a few common examples of why a family buys insurance from a particular company or agent:

Often times the logic above was applied years, even decades, ago. Since that time the decision has never been reviewed. These examples of inertia are not beneficial to either consumers, or the best insurance companies.

The benefit of inertia is more significant in insurance than in other industries. If a restaurant serves bad food, you don’t go back next weekend. However, when an insurance company performs badly, you probably forget before the next bill comes.

Dan has been a CEO or Vice President for high-technology companies for over 20 years. While working as a Senior Vice President of Marketing and Sales for a technology company, Dan was seriously injured while commuting to work. After dealing with trying to get insurance companies to pay his significant medical bills, or to settle a claim so Dan could pay the medical bills, he became intimately aware of the complexity of insurance claims. Dan founded ValChoice to pay forward his experience by bringing consumers, insurance agents and financial advisors easy-to-understand analysis needed to know which insurance companies provide the best price, protection -- claims handling -- and service.
View all posts by Dan Karr →
3 Differences Between Car and Motorcycle Insurance
25 Best Car Insurance Companies