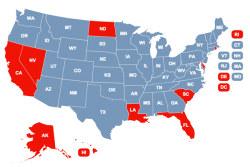 It’s no surprise that home insurance prices vary dramatically from state to state. Homeowners in states with higher risks are of course going to pay more than homeowners in a state with few risks.

The more interesting way to look at insurance is the value the consumer gets for their money. The value of insurance can be determined by looking at how much of the money collected by insurers in premiums is returned to homeowners to cover damages. When looking at value, most people expect the various regions of the U.S. to be similar. Surprisingly, there is large variation, and there is no clear correlation between risk and value.

Ten Worst States for Getting Value From Your Home Insurance

As the list below shows, the ten worst states for getting value from one’s home insurance are not what consumers would expect. Below is a listing of the ten lowest value states for home insurance:

Relationship Between Price and Value

The analysis gets even more interesting when comparing how state rank for both price and value.

At the opposite extreme is Florida: the most expensive and the second lowest value. Some may say that’s because there haven’t been severe hurricanes recently. However, that’s not the case. This analysis is done over a ten-year period in order to account for catastrophic events. To get this information on any of the 50 states, click here.

Is Selling on Price Hurting Consumers?

For many industries, selling on price can lead to disastrous results. While price is clearly important to consumers, many industries put significant effort into explaining why the price they offer is also a good value. Not the insurance industry.

With insurance, we constantly hear the advertisements offering 15% savings or $500 savings or other similar messages. In the case of insurance, buying on price is a practice the industry promotes, but one that hurts consumers.

A Reality That Favors the Largest Insurers

Interestingly, this reality also disadvantages many of the best insurers in the industry. Smaller regional companies lacking both the advertising budget to compete in branding wars are losing market share.

Transparency is the Solution

There is a win-win solution. Transparency into the opaque insurance industry not only benefits consumers, it also benefits the carriers that aren’t spending massive sums of money on expensive advertising campaigns.

Transparency will bring an increased level of focus on policyholders and their needs. Insurance industry transparency needs to be adopted by regulators, legislators and the industry itself.

[**] Paid Loss Ratio calculated over the ten-year period from 2006 to 2015. Calculation done based on licensed data. Source: ©AM Best Company – used by permission.
[***] Insurance Information Institute (iii.org) information published for 2014

Dan has been a CEO or Vice President for high-technology companies for over 20 years. While working as a Senior Vice President of Marketing and Sales for a technology company, Dan was seriously injured while commuting to work. After dealing with trying to get insurance companies to pay his significant medical bills, or to settle a claim so Dan could pay the medical bills, he became intimately aware of the complexity of insurance claims. Dan founded ValChoice to pay forward his experience by bringing consumers, insurance agents and financial advisors easy-to-understand analysis needed to know which insurance companies provide the best price, protection -- claims handling -- and service.
View all posts by Dan Karr →
What does affordable car insurance mean?
ValChoice Launches the First Home Insurance Grading System